Dean Kronsbein, 61, was on the deck of his 70ft yacht Amore with his wife and daughter on Sunday when it ploughed into some rocks, throwing him into the ocean. He was pulled from the ocean, but could not be saved

Two yacht captains are under investigation after a British millionaire was killed when his boat ploughed into rocks off the coast of Sardinia, MailOnline can reveal.

Dean Kronsbein, 61, was thrown into the water after his 70ft Magnum yacht Amore smashed into a reef as the ship’s skipper took evasive action to avoid another vessel.

Although he was pulled still conscious from the sea Mr Kronsbein, a close friend of TV presenter Richard Hammond, suffered a fatal heart attack onboard another passing yacht that rescued him.

MailOnline can now reveal that the ship’s captain Mario Lallone and Luigi Cortese, the captain of a boat called Sweet Dragon owned by controversial former Italian PM Silvio Berlusconi, have both been placed under investigation by the Italian authorities.

Both skippers face possible manslaughter and wounding charges, and it comes as investigators probe the possibility the yachts were racing in a stretch of water out of bounds to them.

Pictured: The damage to the yacht’s bow is seen in pictures taken after it was towed ashore

The vessel (pictured after the crash surrounded by rescue vessels) ploughed into a stretch of rocks and lost its bow in the force of the impact which happened at Il Nibani, just off the coast of Porto Cervo on the island of Sardinia

Luigi Cortese, the captain of a boat called Sweet Dragon (pictured) owned by controversial former Italian PM Silvio Berlusconi is under investigation along with the captain of Amore

The captain of Amore, Mario Lallone, has been placed under investigation by Italian authorities in connection with the incident

A pleasant day on the water off the coast of the Mediterranean island of Sardinia turned to tragedy late on Sunday as Mr Kronsbein’s yacht headed towards the millionaire playground resort of Porto Cervo, where he owns a property.

Investigators are looking at the possibility the yachts were ‘racing’ each other as witnesses spoke of the two boats being on a ‘parallel course’ at the time of the incident.

There are also reports that both vessels were in a stretch of water by a tiny island called Il Nibani that is technically out of bounds for large vessels.

Both yachts have been seized by investigators while local prosecutors in Tempio Pausania investigate possible manslaughter and wounding charges.

Onboard Amore were Mr Kronsbein’s wife Sabine, 59, and daughter Sophia, 27, who were both seriously injured and taken to hospital for treatment where they are still recovering.

Two other couples who were also on board – one British and the other Italian – were slightly injured and have stayed in Sardinia to be questioned by authorities and Mr Kronsbein’s lawyer Egidio Caredda.

Caredda told MailOnline: ‘The investigation is continuing, and we are speaking to witnesses and so are the relevant authorities.

‘The family just want to know how Mr Kronsbein died and we have appointed our own pathologist to look at the autopsy reports as well as an independent maritime expert.’

The captain of the other yacht had been identified as Luigi Cortese and the vessel is owned by scandal-ridden Italian PM Silvio Berlusconi who has a home in Sardinia.

Sources said he was not aboard Sweet Dragon at the time of the incident but ‘members of his extended family’ were and they are expected to be questioned as witnesses.

The Sweet Dragon was at the centre of controversy in 2009 after pictures emerged of scantily clad women being ferried onboard to Berlusconi’s nearby Villa Certosa.

Vessels are showed moored in Porto Cervo late on Sunday night after the stricken craft was towed back to shore, where it was met by emergency services

Pictured: The 70ft Amore is seen on-land in Porto Cervo, Sardinia after being seized by the local authorities while an investigation into the crash is carried out

Paint was also left imprinted on the rocks that the vessel hit, killing one and injuring six – two of them with serious wounds. Mr Kronsbien’s wife Sabine, 59, and daughter Sophia, 27, were also seriously injured and taken to a hospital at Olbia before being transferred to a more specialist unit at Sassari 60 miles away

The crash happened near a set of islands called Il Nibani, which are around two miles off the coast from Porto Cervo, Sardinia

Grimsby born Mr Kronsbein was director of Ultrafilter Medical, based in Ross-on-Wye in Herefordshire, which makes specialised medical equipment including surgical masks.

During the pandemic the company distributed millions of masks for free across the country and took part in the Big Mask Giveaway.

His family owns £5 million Cubberley House close to Ross-on-Wye as well as a four bedroom villa in Porto Cervo close to where he died.

Former Top Gear star Richard Hammond told MailOnline on Tuesday how he had been left ‘heartbroken’ at news of Mr Kronsbein’s death.

‘He really was a larger than life character and I know people often say that but he really was and the world needs more people like him,’ Hammond said.

‘He was big hearted, fun character who wanted people to enjoy themselves when they were with him and he was also an astute businessman. He opened factories in Ross-on-Wye, who does that for goodness sake!?’

‘I just can’t believe I won’t see him again in his colourful waistcoat and looking at his pocket watch.’ 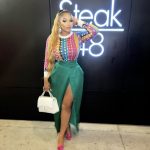 Fashion Bombshell of the Day: Cherish from Miami
Next Article