For “Bullet Train” star Aaron Taylor-Johnson, working on set of the action-packed Brad Pitt film was a strenuous yet hilarious adventure. That is, until an on-set accident landed him in the hospital.

“I was on some crazy mad Keto diet,” Taylor-Johnson told Variety at the Los Angeles premiere of “Bullet Train” on Monday night. “Because I got all scrawny and lean for this, so I basically had low blood sugar levels. We were in a fight sequence and I get drop-kicked across the room. And the one sharp bit of the corner where there wasn’t any padding took a chunk out of my hand. And I literally went wham, passed out. And then I came back and was like ‘Should we go again?’ And they were like ‘No, no, no. You gotta go get stitches at the hospital.’ So then I spent the night in the hospital.”

“Bullet Train” stars Pitt as a hitman who has to fight his way through a train filled with assassins portrayed by Taylor-Johnson, Bad Bunny, Joey King and Brian Tyree Henry. When the group discovers that all of their assignments are related, the high-speed train turns into a battlefield. David Leitch, known for action films such as “Deadpool 2” and “Atomic Blonde,” directed the film.

“You know, when you sign up for a David Leitch movie you know you gotta get a couple battle scars,” Taylor-Johnson said. “Some war wounds.”

Despite Taylor-Johnson’s accident, he says he “had a lot of fun” filming.

“We all just came and had fun, you know,” Taylor-Johnson said. “David Leitch gave us so much room to improv and ad-lib, and we really just wanted to make these characters pop. I mean, it’s such a heightened reality, the tone of this movie. [These characters] are so bombastic, so you wanna make them lifted and pop. So hopefully we’ve done that.”

“Bullet Train” is in theaters Aug. 5. 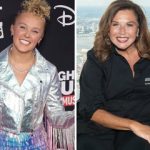