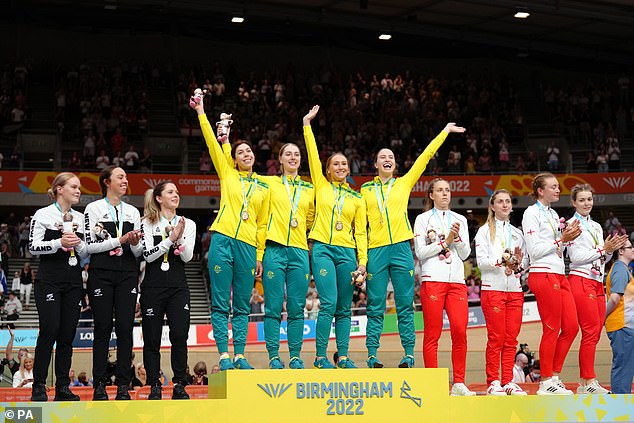 Back in the saddle, back in London and back on the podium. The only thing unfamiliar for Dame Laura Kenny was the colour of the medal hanging around her neck.

Kenny spoke this week about the ‘déjà vu’ she felt on returning to the scene of her double Olympic glory 10 years ago. Well, memories of London 2012 will certainly have come flooding back when she heard the home crowd roaring her on in the women’s team pursuit.

The major difference this time was that the fans were cheering Kenny in a battle for bronze, a shade never normally associated with cycling’s golden girl.

But for the 30-year-old it mattered little, for her real achievement was to be even competing at these Commonwealth Games at all given everything she has been through in the last few months.

At the turn of this year, she was at ‘breaking point’ and considering her future in the sport. She had just had emergency surgery to remove a fallopian tube due to an ectopic pregnancy, only weeks after she had also suffered a miscarriage.

But Kenny is no quitter and she instead reached for her ‘safety blanket’ and got back on a bike. She did so with moments like Friday in mind.

After finishing behind Australia and New Zealand in the morning’s qualifying, England’s team of Kenny, Josie Knight, Maddie Leech and Sophie Lewis met Wales in the bronze medal race. 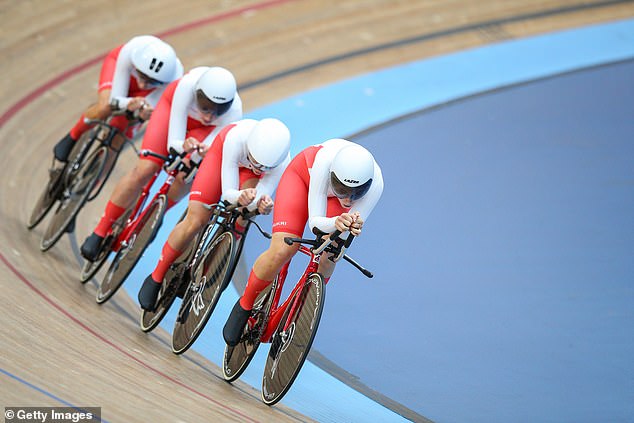 And Kenny, despite later claiming she was the ‘weak link’, turned on the style in the final laps to secure only the second Commonwealth medal of her glittering career, before soaking up the acclaim of her adoring public.

‘I just love being back here. It holds so many great memories for me,’ said Kenny, who laughed at the fact her four-year-old son Albie spent the day at the London Transport Museum instead of watching mum.

‘To be honest, I didn’t think I was going to be here. If circumstances had been different, I wouldn’t have been. So, to be able to play a part for these girls is brilliant.

‘Stepping on the start line, I was a whole bag of nerves. It could have been a gold medal ride at the Olympics. 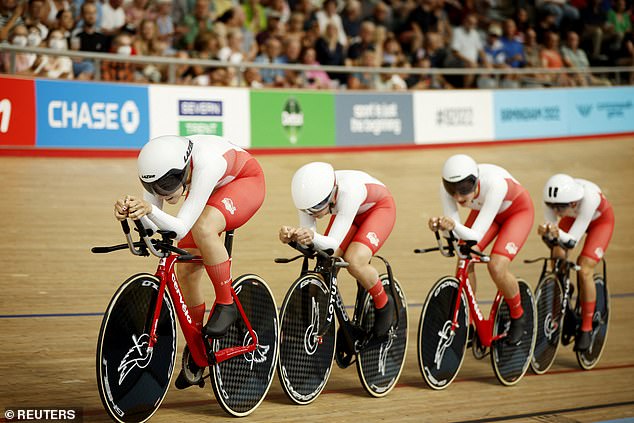 ‘I’ve never felt under so much pressure to win a bronze medal in my whole career. Just because we’ve got a young team and I wanted to help them win and have a taste of the medals that I have had in the past.

‘I think I was the weak link, but I’ll take that, that’s fine. At some point you’ve got to hand it over to the next generation.’

That next generation were still at school when Kenny was making her name on this Stratford track a decade ago. ‘We were sat on our sofas wanting to be the next Laura Kenny,’ admitted Knight, who at 25 is a relative veteran compared to 20-year-old Lewis and Leech, 19.

Indeed, those riders continue to be inspired by their older team-mate to this day. ‘She is the strongest person I know,’ added Knight.

‘A week after one of her main troubles she was on a Zoom meeting with us pretending nothing had happened. She is the ultimate team player.’ 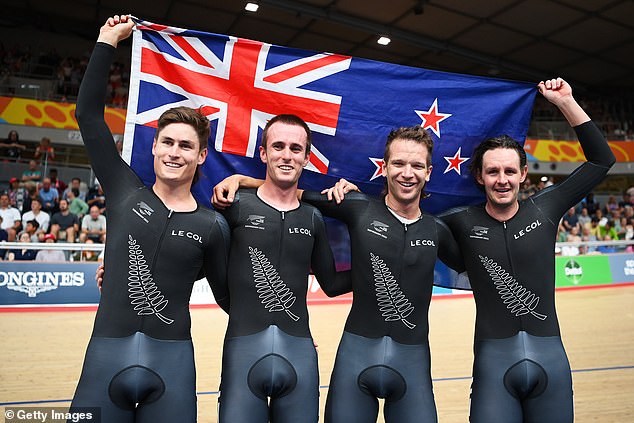 Another sign of the times for Kenny – who claims her chances in Sunday’s points race and Monday’s scratch race are ‘slim to none’ – was that she was helped on to her bike at the start by her retired seven-time Olympic champion husband Jason.

He is here working as an England coach and his riders Ryan Owens, Hamish Turnbull and Joe Truman took silver in the men’s team sprint behind Australia.

The hosts secured a second silver on the track on Friday in the men’s team pursuit, with Dan Bigham, Charlie Tanfield, Ethan Vernon and Ollie Wood losing the gold medal race to New Zealand.

Earlier, Neil Fachie won a record-equalling fifth gold for Scotland – and their first at these Games – in the men’s tandem time trial ahead of Wales’ James Ball and Stephen Bate of England.