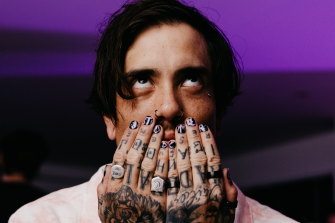 The reverse French, animal print and micro manicures are the latest trends in nail art and men are increasingly becoming the ones wearing them.

Contents
Most Viewed in LifestyleFrom our partners

With their own gender-neutral nail polish collections, musicians such as Harry Styles, Machine Gun Kelly and Tyler The Creator are normalising the sight of men with purple crescent moons, smiley faces and splashes of blue at the tips of their fingers.

“Black nail polish was something that I played with when I was 18,” says Sydney singer Justin Miller, 32, who recently released the single Fake Fcuk under the name JSTNXMLLR. “Then it went out of fashion and there was an insecurity about expressing yourself in that way. Now things have changed, and you can express your personality with different colours.”

Nail art suits the performing arts, but Miller is part of the move towards taking manicures away from the stage and onto suburban streets.

“I also work as a tradie and men on-site have complimented me on my nails,” Miller says. “I was getting groceries the other day and the woman at the register mentioned that she liked the shade of pink I had used. More people are open to acknowledging and accepting men with their nails done today.”

While Miller normally joins his girlfriend for salon manicures, he enlisted nail artist Miss Betty Rose, who has worked with Rita Ora and Nicole Kidman, for his punk-inspired single cover art.

“I am seeing far more male clients now,” Rose says. “And it’s not just for a slap of colour to be worn for the next month. Men are coming in for a treatment having researched nail art. The most recent one that I did was of a man’s favourite quote. I have also done an eyeball, steaks… it’s quite different from my female clients.” 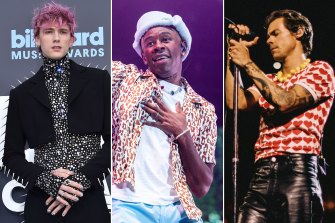 Male members of the queer and performing arts communities are still leading the charge to Rose’s studio in Glebe, but the trend is spreading into other professions.

“There are a lot of rainbows and glitter for queer customers. One of my customers is a lawyer. He enjoys the process because it’s so far away from what’s expected from him at work.”

The male beauty boom is also happening at home, as men paint their toenails with hairy legs propped up against the bathtub. The online stores for Harry Styles’ Pleasing and Tyler the Creator’s Golf le Fleur are set up for Australian customers.

Pleasing releases seasonal collections, with the most recent Shroom Bloom range featuring the pale green Sprouting and glittery sheer The Whole Dewniverse, promoted on the website and social media by Fleetwood Mac founder Mick Fleetwood. Golf Le Fleur offers three shades, a glitter finish along with Georgia Peach and Geneva Blue that have been worn by Tyler The Creator at concerts.

“I always wear glitter,” Tyler told US magazine Allure. “I’ve been wearing it for years, and the thing about [my take on it] is that you don’t notice it until you’re looking at someone’s nail. It’s not loud — it’s subtle. It’s there, but when the light hits it and you see it, that bitch is like, whoa!”

Kelly’s UN/DN LAQR range is the most extensive, with colours spanning the predictably provocative Wet Dream (a clear polish with splatters of white) to Renaissance Man (a brown polish on the border of burgundy).

“When bracelets and rings became redundant to me, I was like, what else can I add?,” Kelly told Vogue. “First it was tattoos and then once I tattooed my whole body I tattooed over my tattoos, then I dyed my hair a million colours. I started doing my nails because it was something I could change out really easily.”

“Everyone wants to have a little more fun and adventure, so we are seeing more interest in colour, nails included,” says Jennifer Horsley, Mecca’s head of artistry. “People want to experiment and try new things. I’ve seen many a man rocking Jinsoon’s Toff and Audacity shades for a grungy winter vibe.”

It’s new terrain for retailers and marketers – which is also creating unexpected hiccups for some wearers.

“I came home from getting my first pedicure with a lilac shade,” Miller says. “Mum came over and she had the same colour.”

Make the most of your health, relationships, fitness and nutrition with our Live Well newsletter. Get it in your inbox every Monday.

Most Viewed in Lifestyle

The post How the art of male manicures went from niche to mainstream appeared first on celebritynewsapp.com. 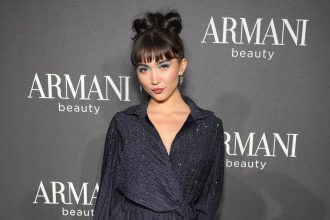