Contents
Read more on Talking ShopI worked at H&M and these are their secrets – why you can never find your sizeI worked in Asda, the weird items people would return & why Sunday’s the worstMost read in FabulousI got pregnant at 48 and 49, people say I’m crazy but I'm so luckyWe bought two shipping containers for our daughters to live in the back gardenMy best mate’s groom picked my bridesmaid dress & everyone's saying same thingI'm a professional cleaner & there's five things I'd never have in my houseRead More on The SunHundreds of thousands of broadband customers face £24 bill hikeI added £3K of value to my house for £75 – but not everyone is convinced

HAVE you ever wondered why shops employ staff simply to welcome you to the store?

While it may seem like a pointless job according to a former JD Sports employee it has a very important purpose.

An insider has lifted the lid on the sportswear giant, revealing what goes on below the shop floor.

As part of Fabulous’ new series, Talking Shop, we’re finding out what it’s really like to work in your favourite high street stores.

This week we meet Arriminta Hardwicke, 22, from Woodbridge, Suffolk, who worked at JD Sports for seven years.

Here Arriminta who now works in a dog creche and lives in Ipswich with her boyfriend Cameron, 20, reveals her least favourite kind of shopper and the biggest perks of working there.

I worked in Asda, the weird items people would return & why Sunday’s the worst

She says: "Heading straight for the most expensive Nike Tech tracksuits, the brazen shoplifter grabbed two, calmly walked through the store, chucked them over the barrier then ran down the street.

"Quick – that guy just ran off with a load of Nike tech fleece!", I screamed at my colleagues.

Four of them ran down the street, tackled the man and managed to get the £400 haul of tracksuits back.

But most days we weren't so lucky.

We would get so many dodgy customers in there – stealing was a daily occurrence and often it would be bulk thefts.

If we did suspect someone, we would usually go over and ask them if they were OK. It was to let them know you are watching them but in a subtle way.

I worked at JD for just under three years while at university and while I loved the flexible hours I hated dealing with thieves every day.

The person who stood at the front of the store at all time was there to greet customers but – they were also there to check for stealing and whatnot.

When I told them they couldn't return it they'd get really angry and have a go at me and shout – I was only a kid.

The worst time was when I realised that I had been scammed out of £300.

It was such a weird situation, the bloke paid me in cash and I counted and checked it, then they took it back off me, almost to count it again himself, then gave me it back.

But I didn't check it that time – I just put it straight in the little box under the till called the counter cash, which is where we'd put large amounts of money, or use if the till was full.

Basically that's what the scam is, when they take the money back off you they secretly switch out the notes for fake ones without you noticing.

Once the customers had gone my manager realised what had happened and told me it was a scam.

I got very emotional at the time. I was so on edge for a good while after that, checking everything again and again to make sure it wouldn't happen again.

The most irritating thing about working there was processing returns.

We had a rule that you couldn't bring back things that had been worn – but people would come back with stuff and you could tell they had washed it and it was over worn.

When I told them they couldn't return it they'd get really angry and have a go at me and shout – I was only a kid.

Some people would bring Airforces and you could tell they were well worn and they'd try and say they were faulty and want their money back.

With some faulty things we'd send them off to be analysed to see if they were actually faulty, but people would get really angry then because obviously we were taking the clothes off them and not giving them any money.

And then there were the people who would switch the price tag to try and grab a bargain.

We would honour a price if they had mistakenly labelled a whole rack of the same clothing item wrongly – but people who had switched tags on one item would be busted.

The customers I disliked the most were definitely the customers that just made things difficult – the ones that didn’t want a certain bag, or didn’t like how long the service was taking, or simply didn’t like the music that was played in the shop.

The customers that made unnecessary fuss were definitely the worst.

But it wasn’t all bad.

The biggest perk of the job was probably the 25 percent discount we had, also if new things came in, we were often allowed to put things on hold for when we wanted to buy them.

We would get so many dodgy customers in there – stealing was a daily occurrence and often it would be bulk thefts.

There weren't any secret sales or ways to get money off – but sometimes there would be clothes that weren’t priced right so when they actually came to the till it would be cheaper than they thought, but that would often be purely accidental.

JD Group spokesperson said: “The safety and security of our staff is our highest priority as a business.

"We do not condone threatening, violent and abusive behaviour in any shape or form, and we have extensive protective measures and procedures in place to ensure colleagues do not have to encounter this to do their jobs.

“As a company, we take a zero-tolerance approach to shoplifting and take all incidents very seriously.

"We specifically train our store colleagues not to put their safety at risk and provide market-leading processes and technologies – from high-quality CCTV to sophisticated product tagging and panic buttons – to help prevent and respond to shoplifting incidents quickly.

"We also have strong relationships with the police in the communities in which we operate – and work closely with them to help bring perpetrators of retail crime, including industry-wide scams, to justice.

“For colleagues, we offer a range of training programmes as part of our onboarding process to ensure they are fully aware of the protections in place, and we regularly encourage them to submit concerns or suggestions on how we can improve practices, anonymously or otherwise.

"The mental health of our colleagues is also of paramount importance to the JD Group and where an incident does occur, we have robust strategies and support networks in place to help ensure their wellbeing."

JD Sports also pointed out that its salaries are now on average 18p more than minimum wage.

The post I worked at JD Sports – I’ve dealt with thieves & scammers & there’s a reason why staff always greet you at the entrance | The Sun appeared first on celebritynewsapp.com. 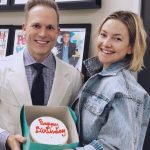