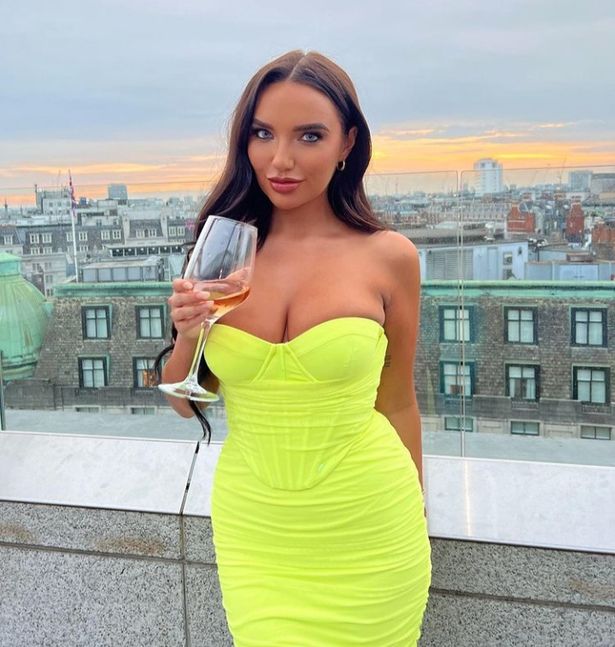 FormerLove Island star Jazmine Nichol has opened up about her recent rush to hospital and how the frightening incident has left her feeling “incredibly luckily” to be alive.

After revealing thatshe’d been rushed to hospital to undergo surgery earlier this week, 21 year old Jazmine has since bravely taken to Instagram to explain that she was taken to hospital on Tuesday 9 August after developing sepsis.

The TV star told her Instagram followers how she had received medical care just weeks after leaving the villa after she had become unwell and was left “vomiting uncontrollably”.

Addressing the terrifying hospital dash on her Instagram Story, the star posted a summary of her experience against a solid black background and thanked her fans for their support.

She wrote: “I'd like to firstly thank everyone for their concern over my health this past week and let everyone know what's happened.

“I became unwell in the early hours of Tuesday morning and was taken into hospital later that day.

“Whilst waiting to be seen my condition deteriorated rapidly to what I now know is Sepsis.”

Jazmine,who rose to fame after appearing on this year's Love Island as a Casa Amor bombshell, added that things could’ve been “very different” had a member of staff not picked up on the seriousness of the situation.

“Had it not been for the quick thinking and action of a staff member who noticed how unwell I had become things could have been very different,” she continued. 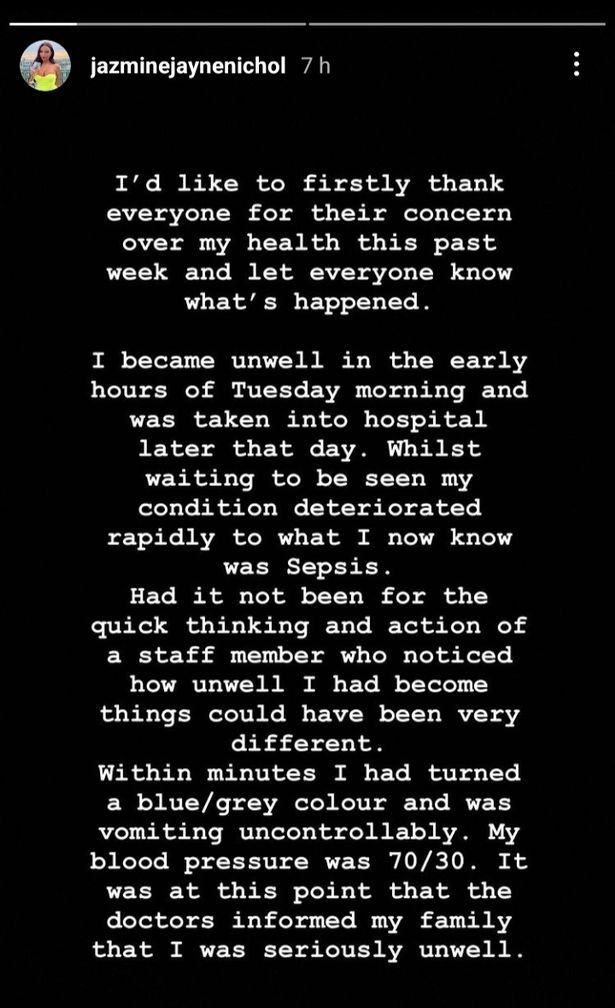 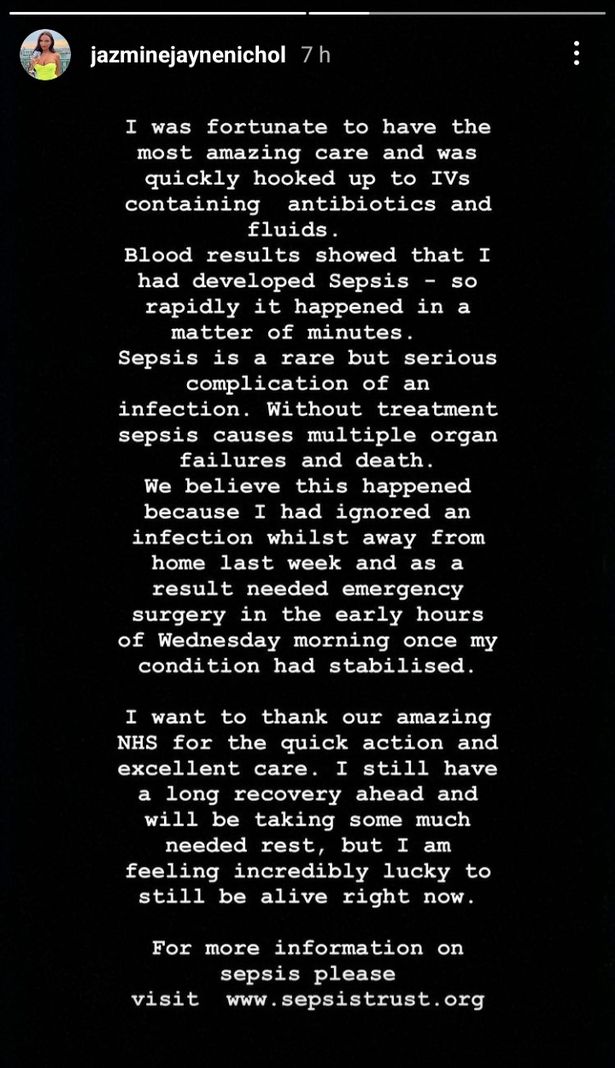 “Within minutes I had turned a blue/grey colour and was vomiting uncontrollably.

“My blood pressure was 70/30. It was at this point that the doctors informed my family that I was seriously unwell.”

She added: “I was fortunate to have the most amazing care and was quickly hooked up to IVs containing antibiotics and fluids.

“Blood results showed that I had developed Sepsis – so rapidly it happened in a matter of minutes.

“Sepsis is a rare but serious complication of an infection. Without treatment sepsis causes multiple organ failures and death. 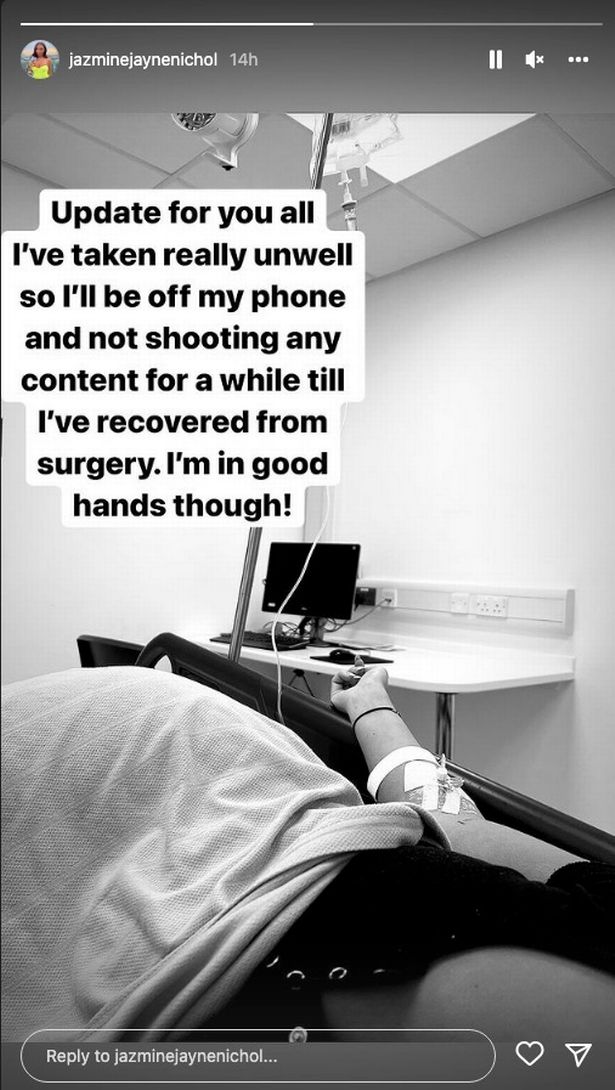 “We believe this happened because I had ignored an infection whilst away from home last week and as a result needed emergency surgery in the early hours of Wednesday morning once my condition had stabilised.”

Following her surgery, Jazmine admitted that she had a long road to recovery ahead of her but took the time to praise the NHS for looking after her during the scary time.

“I want to thank our amazing NHS for the quick action and excellent care,” she said.

“I still have a long recovery ahead and will be taking some much needed rest, but I am feeling incredibly lucky to still be alive right now.” 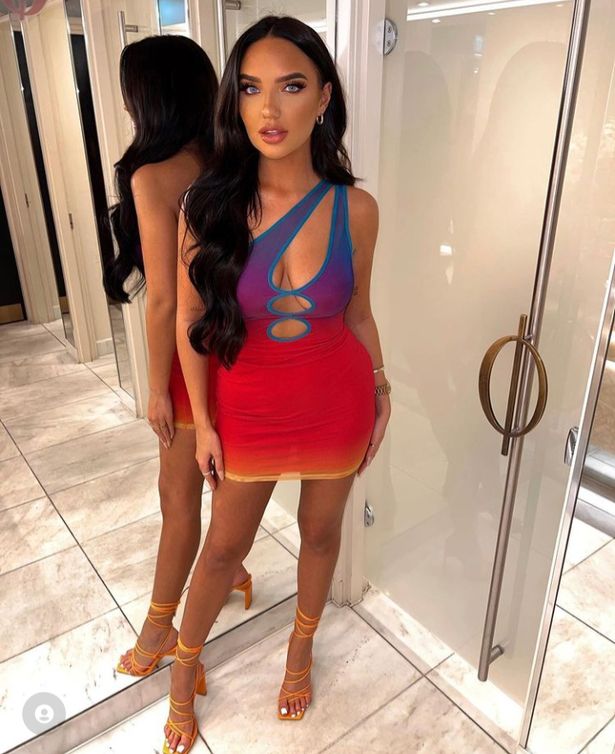 As Jazmine notes,sepsis is a form of blood poisoning which happens when the body overreacts to an infection and starts to damage its own tissues and organs.

As a result, anyone displaying symptoms such as slurred speech or confusion, extreme shivering or muscle pain, the inability to pass urine, breathlessness or skin discolouration should seek immediate medical help. 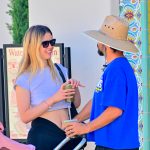 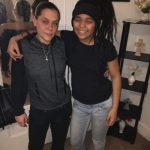