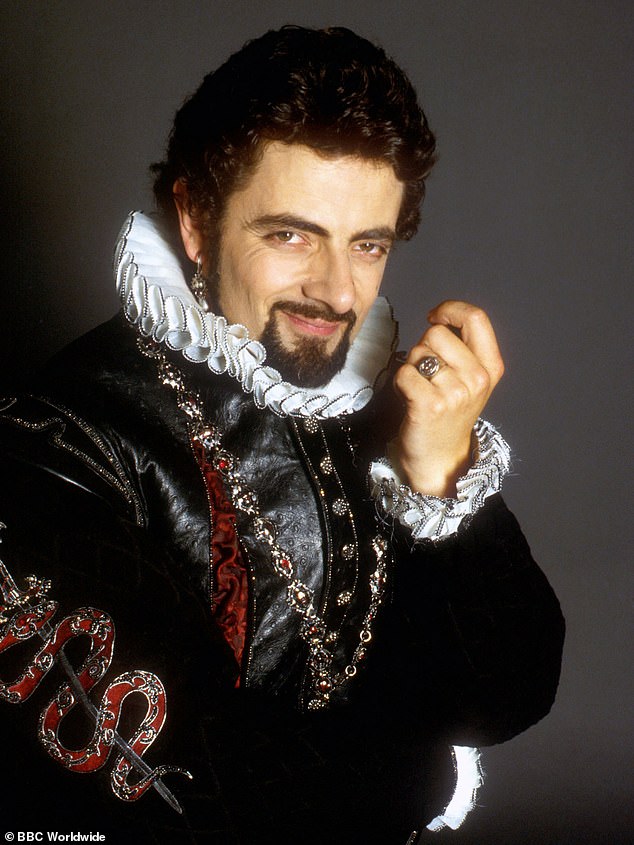 The vast majority of Brits are against cancelling old movies and TV shows with content that is now considered to be offensive, a new poll shows.

Programmes on TV and radio have been removed or censored by outlets including the BBC in recent years over jokes or characters viewed as racist, homophobic or otherwise prejudiced by a modern audience.

The BBC’s amendments have included content warnings before Blackadder episodes, edits to Dad’s Army and some content removed from Steptoe and Son.

An episode of Blackadder’s first season was handed a content warning last year for a racial slur, while Dad’s Army has been given a number of content warnings and edits to remove offensive language.

A study conducted by YouGov showed almost three quarters of the public (72 per cent) think programmes and films ‘that now might be considered to be racist’ should be kept available to the public. 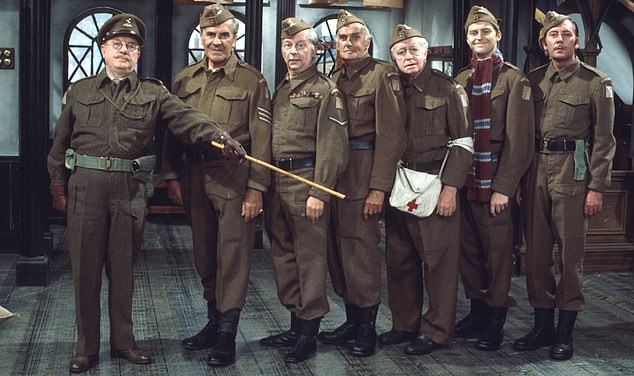 Some action has gone further, with parts of an episode of Dad’s Army being removed to avoid causing offence 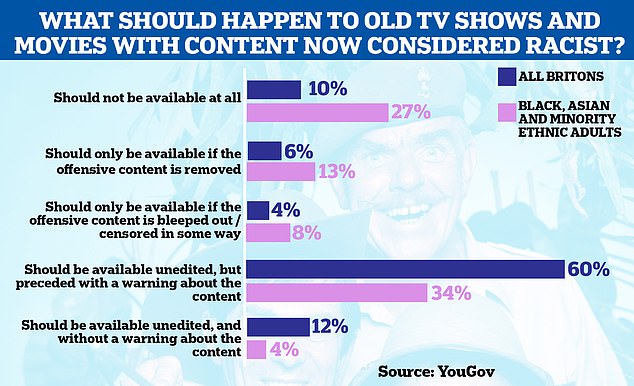 There was a notable difference in the attitude of BAME respondents – 27 per cent of whom said TV and film now considered to have racist content should not be available at all while just 34 per cent thought they should be allowed to be shown even with a content warning.

There was a similar majority of the wider public when asked what the response to films and TV now considered sexist should be – this consensus was also equally reflected between men and women.

Around 57 per cent of all Brits said content now considered sexist by modern audiences should be fully available with a warning about its content – 58 per cent of men and 57 of women also said so. 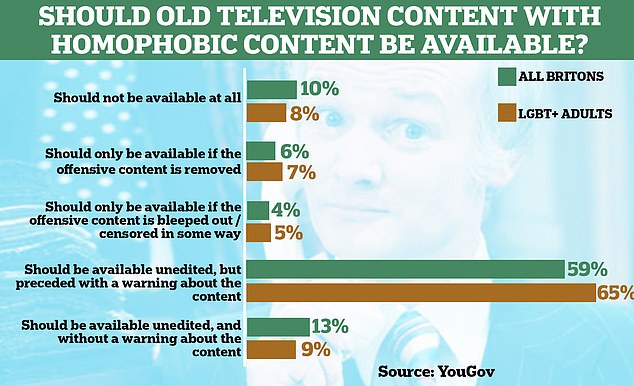 People in the UK also agree on having warnings on now-problematic content but not banning the material when it comes to homophobia – 59 per cent of people agreed.

This figure was slightly higher when it came to LGBT+ respondents – 65 per cent said material they deemed offensive should be allowed uncut with a warning and nine per cent said content warnings shouldn’t be needed at all.

The question of whether films and TV programmes should be given content warnings or banned has been controversial in recent years.

In 2020, a number of TV shows following the Black Lives Matter protest, including an episode of Fawlty Towers because of a John Cleese Hitler impression and a number of Little Britain episodes which depicted characters in blackface. 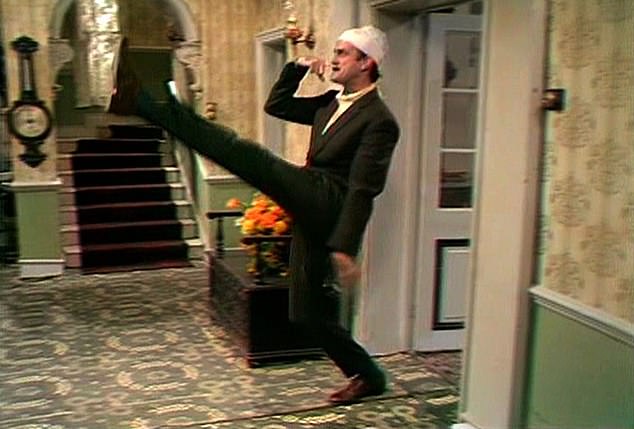 Almost all episodes of TV shows at the BBC and elsewhere have been restored with either content deemed offensive removed or with content warnings. The BBC has since aired ‘The Germans’ episode of Fawlty Towers after co-creator John Cleese lashed out at the corporation.

One particularly bizarre moment occurred in September 2020 when beloved children’s TV show Brum, which follows the adventures of a magical car, came with the warning: ‘This series was originally aired in the 90s and early 00s and may reflect the language and attitude of the time.’ The BBC quickly clarified this had been done by mistake.

The show ‘contains language and attitudes of the time that may offend.’

The special prompted a slew of complaints of a homophobic slur as Michael Crawford’s character Frank Spencer is called a ‘p**f’ after dressing up as a pixie. 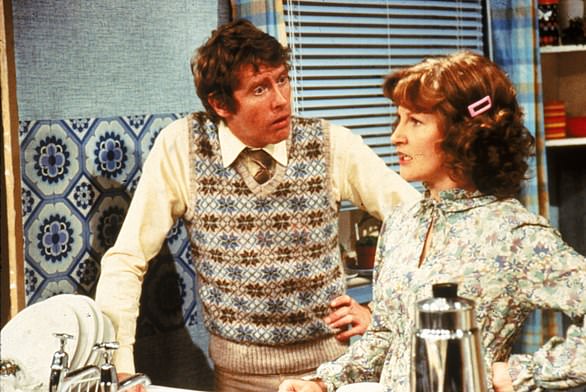 Reaction: BritBox added a ‘woke’ content warning to the Christmas comedy Some Mothers Do Ave Em (Michael Crawford and Michelle Dotrice are pictured as the main characters)

Britbox said the episode, which has also been flagged by Channel 4, ‘contains racial stereotyping which some viewers may find offensive’. 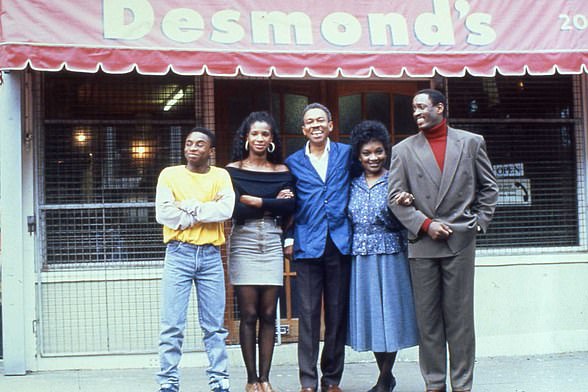 Desmond’s: The BBC and ITV streaming service placed the caution on one episode called ‘Hello Aunty Susu’, which includes a discussion about hereditary traits

Dozens of old episodes have had warnings added to them due to content involving black characters being abused racially.

Most episodes feature a warning that reads: ‘Contains emotional scenes and medical procedures.’

One in particular warns: ‘Contains emotional scenes and racist language and attitudes which may offend some viewers.’ 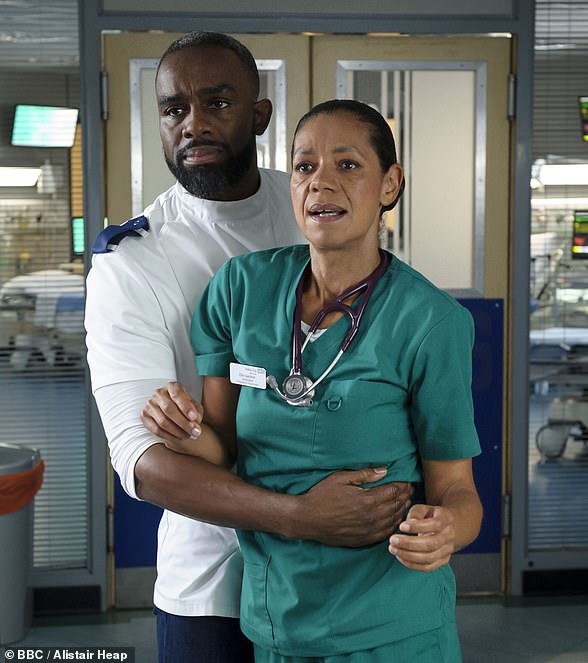 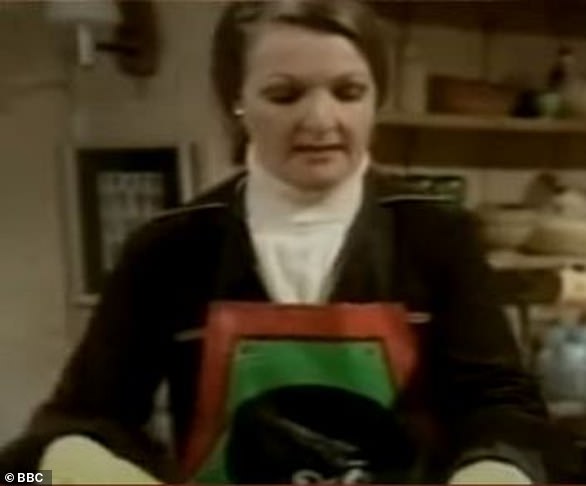 Warning: A viewer discretion warning has been given to BritBox’s re-running of 1970s show The Good Life after apron featuring Robertson’s jam since-banned Golly badge is shown

A warning was issued on a classic 1968 episode which saw Hilda and Stan Ogden pay a visit to a Chinese restaurant.

The scenes saw Stan brand one Chinese man ‘the son of an Orient’ after trying to talk to the waiter in French, and went onto brand his food ‘foreign tack.’ 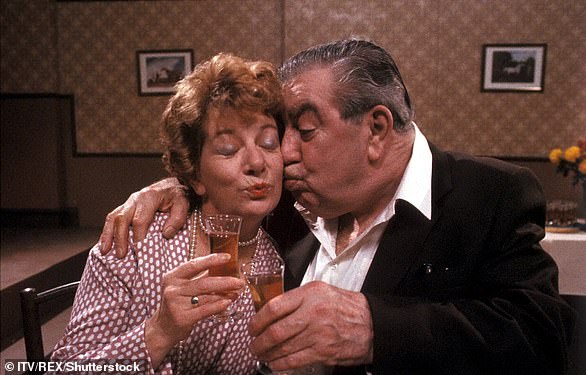 Awareness: Coronation Street was hit with an offensive content warning for scenes involving Stan and Hilda Ogden (pictured in 1983)

The family sitcom – which starred Patricia Routledge as Hyacinth and Clive Swift as her husband Richard – featured several jokes that have fallen foul of modern-day channel bosses.

In one episode, many of the show’s characters make jokes about a Polish person where they interrogate his right to be living in the UK.

As a result, Britbox has now added a disclaimer warning viewers that the series ‘contains ­language and ­attitudes of the era that may offend’ 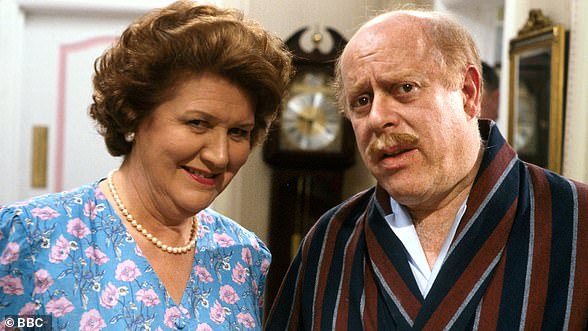 Warning: Keeping Up Appearances was given a viewer discretion warning for its release on the streaming service BritBox

The ITV detective drama, which first aired in 1997, came under fire over scenes of Morris dancers with blacked-out faces.

TV censors at streaming service BritBox warned viewers the season two episode Blood Will Out, ‘includes traditional dancing that might offend some viewers’

Midsomer Murders: BritBox warned viewers the season two episode Blood Will Out, ‘includes traditional dancing that might offend some viewers’ 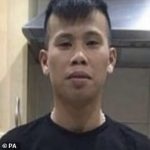 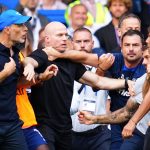