No one cracks jokes quite like Ryan Reynolds, but this year he gave Blake Lively something extra special for her birthday: a (mostly) sincere birthday post on Instagram. Reynolds is notorious for slipping a dash of his trademark humor into everything he does — including celebrating his wife. However, this year, he shared a series of candid photos of himself and Lively alongside an unabashedly romantic caption.

“Happy Birthday, @blakelively. You’re spectacular,” Reynolds wrote. “I’m not sure if you were born or invented.” Since this is a post from the “Deadpool” star, he added, “Also, thank you for urging me to leave the house every now and again

The photos Reynolds chose are mostly adorable photos of him and his wife enjoying time away from the house. In one pic, they appear to be cuddling in a restaurant, and in another, they’re all bundled up for a winter walk. In true Reynolds fashion, one photo is not like the others. If you click through to the seventh slide, you’ll find a photo of Lively with a piece of lettuce on her face.

Still, Reynolds’s tribute is in stark contrast to his birthday shout-out to Lively from 2021. Last year, he shared a TikTok of himself with Mariah Carey in his Instagram Stories alongside the caption, “My favorite thing that’s ever happened on August 25th.” Aug. 25 is Lively’s birthday.

Thankfully, Lively’s sense of humor is closely aligned to that of her husband’s, and she’s just as likely to troll him as he is to troll her. She responded to her husband’s sweet post in the comments writing simply, “

Reynolds and Lively’s love for teasing each other online speaks to just how well they know one another. The couple officially tied the knot in September 2012. Since then, they’ve welcomed three daughters: 7-year-old James, 5-year-old Inez, and 2-year-old Betty. In a 2021 interview with Entertainment Tonight, Reynolds shared why his and Lively’s relationship is so enduring. 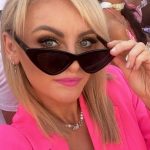 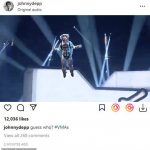