Schoolgirl, eight, who was filmed dancing along to Sweet Caroline in the stands captures nation’s hearts AGAIN as she is presented with Lionesses shirt during BBC interview before kick-off

Eight-year-old Tess Dolan stole the nation’s heats after cameras picked up her incredible dancing to Sweet Caroline during the Euro semi-final as the Lionesses beat Sweden.

She did it again today at Wembley as the schoolgirl was interviewed by Gabby Logan, Ian Wright and Alex Scott on BBC1 before the final against Germany.

Gabby Logan asked her what it was like to be at the final after her dance went viral and she said: ‘It feels crazy!’

‘I’m feeling very positive and I feel like we can win this match.’

‘I’m feeling very positive and I feel like we can win this match,’ Tess Dolan told the BBC’s Gabby Logan

‘I’m feeling very positive and I feel like we can win this match,’ Tess told Gabby Logan

She was interviewed by Gabby Logan, Ian Wright and Alex Scott on BBC1 earlier today

Tess Dolan, 8, has become an Internet sensation after being filmed dancing at the England Women’s game last night in Sheffield

Schoolgirl Tess, eight, went viral after her celebrations went live to the nation on the BBC

She was then told by Gabby Logan to watch a video of her favourite Lioness Alessia Russo, who told the young fan: ‘Hi Tess its Alessia here, just wanted to say a massive thank you for all your support this summer.

‘We have loved hearing you on the TV and on Twitter – so much so I would like to give you this shirt just to say thank you.

‘I hope you love it and hope to see you soon.’

Gabby Logan then handed Tess the fan the shirt with a message which read: ‘To Tess, best wishes A. Russo.’

Eight-year-old Tess screamed in delight and said she would definitely get changed into the shirt.

Gabby Logan asked Tess Dolan to look at a screen which was showing a video of her favourite England player Alessia Russo, who gave her the shirt she wore at the semi-final

The presenter told Tess the shirt was the one Russo wore in the Sweden game and she exclaimed ‘wow!’

Ms Logan asked the young fan to keep the shirt ‘really safe’ to which she said, ‘yeah, I will’.

Alex Scott told Tess she was a ‘huge fan of your dancing’ and asked if we would see more today.

She said that Sweet Caroline was her favourite football song and shouted ‘woo!’ when Ms Logan said we would hear more of the anthem today.

The post Schoolgirl, 8, who danced to Sweet Caroline gets with Lionesses shirt appeared first on Celebrity. 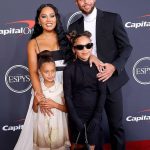 The 2022 ESPY Awards Brought Fashion to Sports: Our Favorite Looks Including Steph Curry in Bottega Veneta, Ayesha Curry Wearing Monot, Ciara Dressed in Sabina Bilenko Couture and Others
Next Article