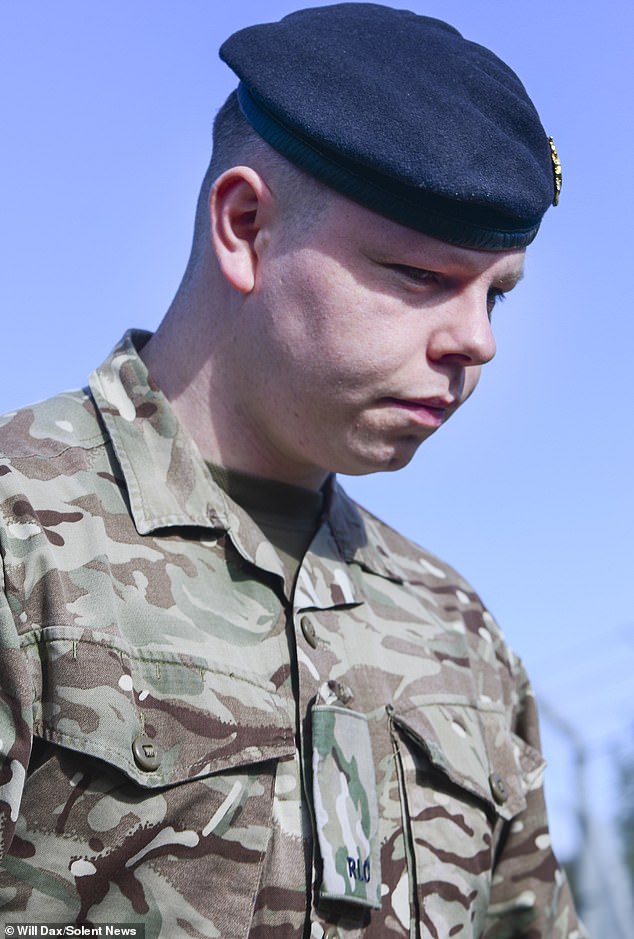 Soldier, 22, is kicked out of the army after he paid two female colleagues for X-rated photos and videos before blackmailing them by threatening to share them online unless they gave him his money back

Two female British Army soldiers who sold explicit sexual photos and videos of themselves to a male colleague were blackmailed after he threatened to expose them online if he did not receive a refund, a court martial has heard.

Private Thomas Davies treated his victims like ‘prey’ after offering to pay them up to £400 for intimate photos, a sex tape and a video call in which the women were in ‘a state of undress’.

Demanding his money back, the ‘mean and nasty’ 22-year-old sent one of the victim’s aunts a screenshot from a topless video she had made of her giving her boyfriend oral sex.

He later threatened to share the photos of both women on social media if the cash was not sent back to him.

After admitting two counts of blackmail, Pte Davies, of 3 Regiment Royal Logistics Corps, based at Abingdon, near Oxford, has been dismissed from the forces with a judge condemning him for treating his victims as ‘commodities’.

Prosecuting, Major James Eveleigh told Bulford Military Court that the first woman – who has since left the Army – had first been paid to send Pte Davies sexual photos on Snapchat, before agreeing to send a sex tape of her and her partner for £400.

Private Thomas Davies (pictured) treated his victims like ‘prey’ after offering to pay them up to £400 for intimate photos, a sex tape and a video call in which the women were in ‘a state of undress’

He explained: ‘[The first female soldier] consensually shared intimate personal images with a Snapchat user [Pte Davies], for which she was paid £125.

‘She later shared a sex tape for £400. When she did not receive payment she challenged that Snapchat user.

‘[Pte Davies] demanded she return all the money [paid to her] or he would share the images and video on social media and with her aunt.

‘She paid £70 by bank transfer. Despite this, her aunt later received an image of her in a state of undress.’

The court heard the second victim was approached by Pte Davies for images of her in her underwear, before agreeing to be paid £60 for a video call whilst she was wearing a bikini.

However, unbeknown to her, Pte Davies screen recorded the call and threatened to share the video unless the woman paid him back his money.

‘Pte Davies asked [the second female soldier] to send images of her in her underwear,’ Major Eveleigh continued. 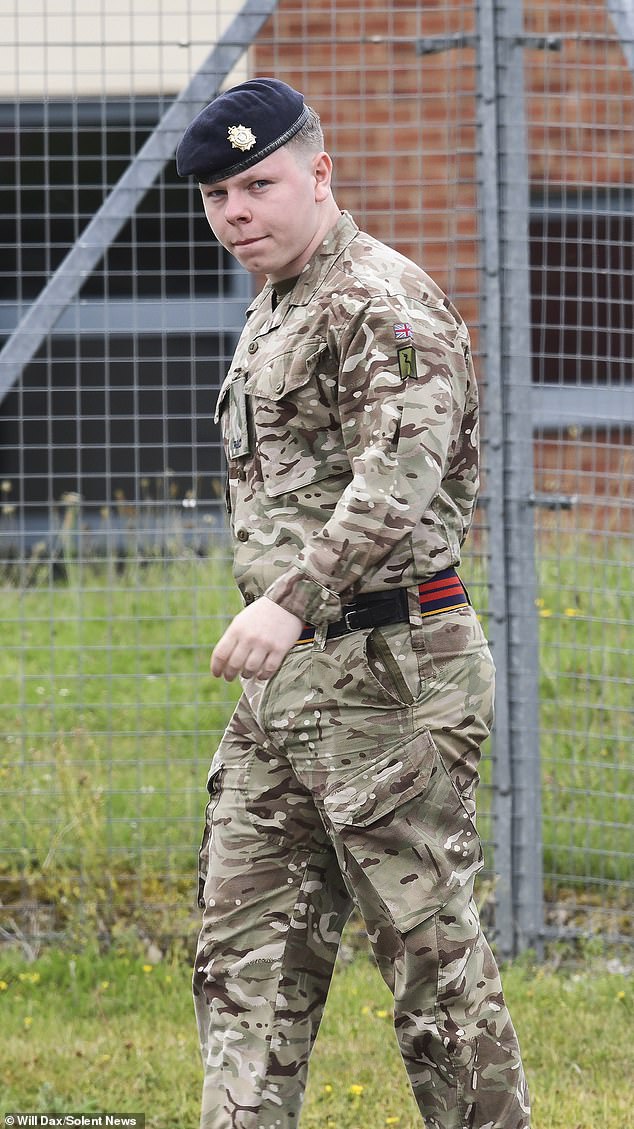 After admitting two counts of blackmail, Pte Davies (pictured), of 3 Regiment Royal Logistics Corps, based at Abingdon, near Oxford, has been dismissed from the forces with a judge condemning him for treating his victims as ‘commodities’.

‘She later video called him. She was wearing a bikini. He paid her £60.

‘He had recorded the video call and said he would share it online unless she paid him. She paid him £60 later the same day.

‘[Pte Davies] acted upon other service personnel as prey.’

Kellie Enever, defending Pte Davies, said that though her client’s actions were unacceptable, the photos and videos sent began as ‘genuine business transactions’.

She said: ‘It is agreed that both these service personnel had agreed to take photographs of themselves and sell them for a fee.

‘The two complainants in this case entered into a genuine business transaction.

‘This was consensual between all parties. It took a turn when Pte Davies decided he could not afford to pay this money.

‘In terms of one of the complainants and the video, that is perhaps the most serious matter of the offences.

‘She agreed to send a video of herself giving her boyfriend oral sex in exchange for £400. [Pte Davies] refused to pay that money.

‘As a (young person) who grew up in a generation of people who seem to put their entire lives on social media, [Pte Davies] didn’t think there was anything wrong [with what he did].

‘That perhaps gives you an insight into his mind and his maturity – or lack of.’ 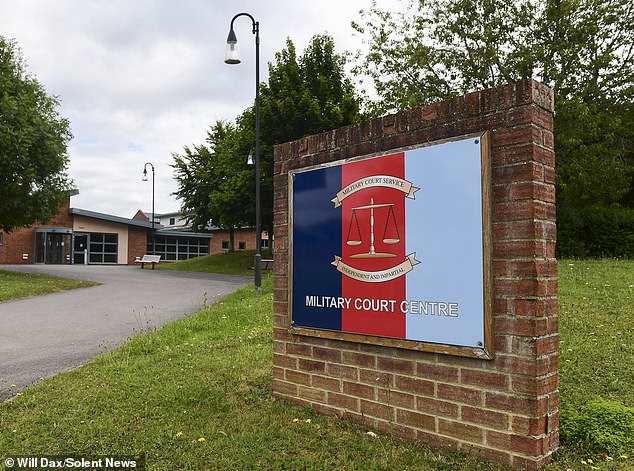 Prosecuting, Major James Eveleigh told Bulford Military Court (pictured) that the first woman – who has since left the Army – had first been paid to send Pte Davies sexual photos on Snapchat, before agreeing to send a sex tape of her and her partner for £400

The court martial heard that as part of his blackmail Pte Davies had sent a video of himself scrolling through the first victim’s Facebook friends list, saying she had two minutes to send the money.

Victim impact statements read to the court heard the first victim, who had the screenshot of her sex tape sent to her aunt – in which she appeared topless and in her underwear – had left her in fear of how her family now viewed her.

‘I feel less trustworthy of people,’ the statement read. ‘Screenshots of the video were sent to a family member of me topless.

‘I fear they may see me differently now.’

In her impact statement, the second victim said she no longer felt comfortable using social media and avoids talking to people online as a result of the incident.

‘These women appeared to be a commodity [to you],’ Judge Reed said.

‘You appeared to have treated them without any care for their integrity or security.

‘You may have taken some time looking for their social media profiles before targeting them.

‘These were mean and nasty offences committed against two fellow soldiers who were deliberately targeted. You clearly intended to maximise threat and humiliation.’

‘You have corroded the bonds of trust between service personnel. There is no place in the Army for those who blackmail their colleagues.’

Pte Davies was kicked out of the armed forces and handed an eight month jail sentence, suspended for two years. 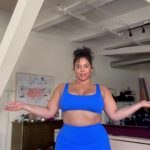 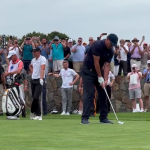