China spurred on by West's failures with Russia says expert

Sir Gerald Howarth, former Conservative defence minister under David Cameron, said he was “extremely concerned” by the escalation of Chinese military activity in the Taiwan Strait and around the island nation but he was “not surprised”. Sir Gerald claimed the West had “failed to respond” to Putin’s initial seizure of Crimea in 2014 and had partaken of a “catastrophic retreat” from Kabul last year, and that both of these events had acted as a “green signal to dictators” such as Xi to engage in illicit behaviour. His comments come as Chinese foreign minister Wang Yi branded US Speaker of the House Nancy Pelosi’s visit to Taiwan “manic and irresponsible” as China launched more than 100 planes, including fighter jets and bombers, and over 10 warships into the nearby Taiwan area by way of retalliation.

Sir Gerald said: “I am extremely concerned but we should not be surprised at what is happening. This is the consequence of years of complacency, naivety and weakness on the part of the West.

“I have been warning for years following the seizure of Crimea by Putin in 2014 that we should expect him to take further action particularly to create a land link from Russia through the Donbas to Crimea.

“The failure of the West to respond to that, and the catastrophic retreat from Kabul orchestrated by a weak US President in Joe Biden last year, these are green signals to dictators around the world.

“Therefore, we should not be surprised that Xi Jinping, the Communist leader of China, is following up on his declared ambition to recover Taiwan from independence.”

In terms reminiscent of Russia’s gaslighting over the conflict in Ukraine, Wang, speaking at a meeting of Southeast Asian foreign ministers in Cambodia, said China had tried to avert the crisis in Taiwan  by diplomatic means but would never let its core interests be hurt.

Unusually, the drills in six areas around Taiwan were announced with a locator map circulated by China’s official Xinhua news agency – a factor that for some analysts illustrated playing to both domestic and foreign audiences.

In Beijing, security near the US Embassy was unusually tight though there were no signs of significant protests.

A Chinese man near the embassy referred to the Speaker of the House as “Comrade Pelosi” as he labelled the potential invasion of Taiwan as a “good thing”, suggesting the public mood in China could be behind military activity.

Ms Pelosi, the highest-level US visitor to Taiwan in 25 years, praised its democracy and pledged American solidarity during her brief stopover. Chinese anger could not stop world leaders from travelling there, she said.

“Our delegation came to Taiwan to make unequivocally clear that we will not abandon Taiwan,” Ms Pelosi told Taiwan’s President Tsai Ing-wen, whom Beijing suspects of pushing for formal independence – a red line for China.

China summoned the US ambassador in Beijing in protest and halted several agricultural imports from Taiwan.

The United States and the foreign ministers of the Group of Seven nations warned China against using Ms Pelosi’s visit as a pretext for military action against Taiwan.

But China’s military announced their use of missiles in waters off Taiwan in the aftermath of Ms Pelosi’s visit as part of exercises in six zones set to run until midday on Sunday.

They claimed to have activated more than 100 military planes and over 10 warships near the island of Taiwan.

Taiwan’s defence ministry said it scrambled jets to warn away 22 Chinese fighter aircraft that crossed the Taiwan Strait median line into its air defence zone, and said troops fired flares late on Thursday to drive away four drones that flew above the area of its Kinmen islands, off the southeastern coast of China. Japan also protested that five missiles appeared to land in its economic zone.

The post West to blame for China threats to Taiwan after sending ‘green signals to dictators’ appeared first on celebritynewsapp.com. 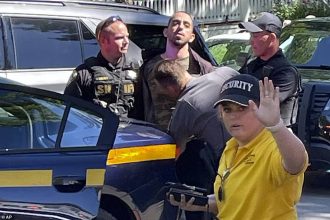