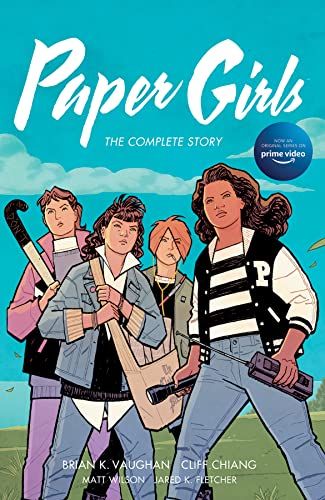 *SPOILERS FOR SEASON 1 OF Paper Girls BELOW!*

The long-awaited TV adaptation of Brian K. Vaughn’s Paper Girls is finally here! While it’s always exciting to hear about a beloved story being adapted on screen, a shift in medium can breed major differences between the original story and the one TV writers are trying to tell. And yes, this happens with Paper Girls.

If it’s been a while since you read the comics, then you might not notice immediately. But trust us, there are definitely some changes. Curious about what specifically? Here are 14 differences between the Paper Girls comics and the new TV series on Prime Video.

How the girls first discover the device

In the TV show, the girls are given the device for safekeeping by Heck and Naldo before they die. But in the comics, after they are attacked by a mysterious member of the STF Underground, it gets dropped on the ground and Erin ends up picking it up before they go down to the basement.

Also: the underground doesn’t *actually* have an official name in the comics, while the “Old Watch” is known as the “Old-Timers.”

How Erin gets shot

In the TV show, Erin is accidentally shot after Mac points a gun at the girls thinking it’s empty. In the comics, when the girls head over to Mac’s house to hide, they discover Alice in the house. Alice points the gun at herself, and Mac tries to stop her by taking the gun away. It accidentally goes off, and so the bullet ultimately still hits Erin in both versions.

Alice is also completely different in the comics vs. the TV show. She is only seen in this single chapter in the comics, while in the TV adaptation, she is seen mourning over Mac’s future death and seems to have a good relationship with her.

How the girls meet older Erin

In the TV show, the girls head over to Mac’s house before heading over to Erin’s. That’s where they meet the older version of Erin, who basically freaks when she meets them. In the comic books, the girls meet her while they are traveling around in Stony Steam.

Older Erin’s life is also completely different. The TV show reveals that she’s a paralegal, but she works at the local paper in the comics. Erin’s relationship with Missy is also changed. The two sisters are still very close in the comics as Erin calls her to help the girls get into a hard-to-reach fold using her helicopter. However, they have basically no relationship with one another on the show, which causes a lot of tension. 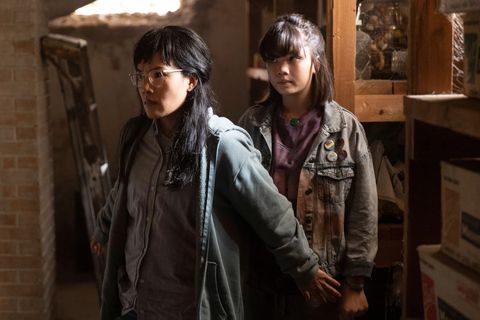 KJ’s field hockey stick allows the girls to get a message across to not trust the other Erin, who wants to scatter them around the timeline to separate them. Erin uses to stick and a fold to send a message to herself. In the TV show, the stick is discovered by the Old-Timers after KJ kills one of them, which sparks a manhunt.

What the map leads to

In both versions of the story, older Erin is the one who connects with the device and is able to see the map. The map leads them to the mall and other spots to find the folds. In the TV show, the map is used to tell them where to find the robot on Larry’s farm. The device also gives Erin the power to control one of the robots, which ultimately leads to her death. Older Erin survives in the comics.

One of the biggest changes is the inclusion of Larry, Juniper, and Dylan. The two members of the STF Underground don’t exist in the comics, and they are a big part of the group in this new version. Meanwhile, Dylan only appears briefly in the comics, but he doesn’t meet Mac in the future after her death.

Some monsters are new too

In early chapters, it’s clear that some monsters try to infiltrate different times that the girls visit due to, well, time travel issues. But you don’t really see monsters in any of the other timelines in the TV show. In fact, you don’t even see the dinos the Old-Timers use until the very end of the show.

Who gets their period

The robots are actually there

Tiffany is the only person who can see the robots when they land in 1999, and it looks like there are multiple of them fighting each other in the comics. In the TV show, there is only one robot on each side, and everyone is able to see them.

How KJ discovers her sexuality

One of the biggest plot points in both mediums is KJ’s sexuality. After seeing her future self at the Fourth of July party, KJ meets older KJ’s girlfriend and discovers that she’s a lesbian. In the comics, KJ touches a device that lets her see the future, where she sees her kissing Mac. Whether Mac and KJ get together in the show is still a question mark, but it’s canon in the original series.

When the girls end up is also entirely different. Instead of traveling to January 1, 2000, they discover they’re actually on July 3, 1999.

In both 2000/1999, the girls meet a future version of Tiffany. 2000 Tiffany has more of a gothic style, is married, and decided to go to business school before dropping out of college. Tiffany in 1999 is an MIT dropout, more of a raver, and only has a boyfriend whom she doesn’t see herself marrying.

Younger Tiffany also doesn’t know she’s adopted in the TV series and discovers the truth from 1999 Tiff, while the comic books have her already knowing she is adopted from issue 1.

Younger Tiffany discovers from Prioress that she actually ended up inventing time travel in the future with a group of other scientists through the Quilkin Institute. In the comics, it’s Doctor Brunstein who seemingly figures it out. 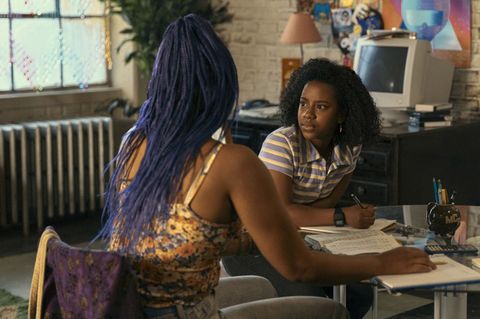 Prioress plays an even bigger part in the TV series, as she is the one trying to track down the Paper Girls to make sure they don’t continue messing with time. But she doesn’t really appear much in the comics, only coming out during the robot battle where she is killed. Meanwhile, in a surprise twist in the season 1 TV finale, the Prioress helps the girls from escaping the citadel by going into special pods. She is then shot and killed for her treason against the Old Watch.

How the girls are split up

Our favorite Paper Girls are split up on their journey back home multiple times in both the TV show and the comics. In the comics though, they don’t end up in the citadel together (only Erin does) and they don’t travel via different pods. KJ and Mac end up in a to-be-revealed time, which we’ll likely explore if/when the show comes back for another season, while Tiffany and Erin end up in the 1950s (which only happens to KJ in the comics when they are split up by other Erin).

The post 14 Differences Between the 'Paper Girls' Comics and the New TV Show appeared first on celebritynewsapp.com. 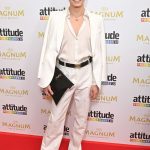 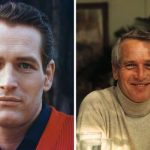